NASA footage the Apollo 11 launch on July 16, 1969. This was fifth manned mission in the Apollo era. Watch the following video of this launch. Run time is 1:07.

On July 20, 1969, Apollo 11 became the first spacecraft in modern human history to land on the surface of the moon. Six hours later Neil Armstrong became the earthling of the modern era to set foot on our nearest cosmic neighbor and make the most famous footprint in human history. 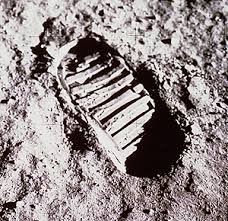 Keep your eyes on the skies!

Ray is a science fiction author, poet, personal development expert, and training professional. He is currently writing a science fiction trilogy titled Anunnaki Awakening. Book 1 - Revelation - is due out in Summer 2014. He is the founder and owner of The Affirmation Spot. He has been writing professional sales training at a Fortune 100 company for the past 13 years. Ray enjoys travel, photography, astronomy, history, college sports, and speculative topics. He lives in Louisburg, KS with his wife April and enjoys spending several weeks each year in Hawaii.
View all posts by Ray A. Davis →
This entry was posted in science, space, space exploration and tagged Apollo, Apollo 11, Apollo 11 launch, Apollo 11 moon landing, NASA. Bookmark the permalink.