Today’s Thought:
Whose idea should be off limits? Whose right to express and explore denied? If you’re willing to make that call, then it could be your freedom, your right that is shut down. Let us create a world where all ideas are in play and all voices are heard. Empowered minds want to know. 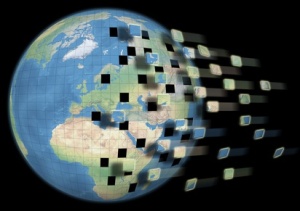 One of the oldest aphorisms you probably know is, “where there’s smoke, there’s fire.” We live in supposedly free post-industrial societies where information and ideas are shared for the betterment of humanity. Really?

Have you noticed the pattern? In our “free” societies, leaders no longer have to censor most information. They have developed sophisticated, herd-mentality psychology techniques for convincing many to censor themselves. Using these techniques, the powers that be can, and regularly do, convince you to edit your speech, your thoughts, and your actions.

Worse, not only do you do this in the moment, but many are easily steered away from whole areas of discovery, research, and thought. They have been given an “official version” of what is by authorities, the media, or “experts” and that is enough for them, without any first-hand knowledge, to condemn those who venture outside this conformity.

There are many, many tools used to keep you within this mental pen. The three I’m going to discuss briefly each touch on several logical fallacies. Each is all about setting boundaries, mental fences, that place ideas off limits to all but the most daring. These are:

We are all impacted by these and other mind control techniques every day. Depending on the issue, we are more or less persuaded by them to “stay in line”, “support the party line”, and steer clear of whole areas of thought.

This is a topic that books could be written on. I cannot do it justice here. My goal is to nudge the door open just enough that you can choose to walk through and break your conditioning.

What can you do?

There is almost never only one way to see something. None of us possesses “the truth, whole truth, and nothing but the truth.” We can and should dialogue and learn from each other and stand shoulder to shoulder in growing in understanding together. Let ideas flow freely and allow the chips to fall where they may. Because where there is smoke, there usually IS fire. When you see the smoke, but you’re told the fire doesn’t matter….challenge, question, explore, express, and GROW!

Ray’s novel, Anunnaki Awakening: Revelation, is now available in paperback and Kindle versions. This is Book 1 in an interstellar interdimensional trilogy exploring human origins and our destiny.

I am the Founder of The Affirmation Spot, author of Annuanki Awakening, and co-founder of 6 Sense Media. My latest books are the Anunnaki Awakening: Revelation (Book 1 of a trilogy) and The Power to Be You: 417 Daily Thoughts and Affirmations for Empowerment. I have written prolifically on the topics of personal development and human potential for many years. By day, I write sales training for Fortune 100 company. I began studying affirmations and positive thinking after a life-threatening illness at 25. My thirst for self-improvement led him to read the writings of Joseph Campbell, Wayne Dyer, Deepak Chopra, Neale Donald Walsch, and many other luminaries in the fields of mythology and motivation. Over time, I have melded these ideas into my own philosophy on self-development. I have written, recorded, and used affirmations and other tools throughout that time to improve my own life and I have a passion for helping other reach for their goals and dreams. Ray holds a Bachelor's of Science Degree in Secondary Education in Social Studies from University of Kansas. He lives in Spring Hill, Ks with his wife.
View all posts by Ray Davis - The Affirmation Spot →
This entry was posted in politics and tagged be the change, conspiracy theory, mind control. Bookmark the permalink.