Today’s Thought:
The tribe says, “Pick a side.” The wise say, “Been there. Done that.” 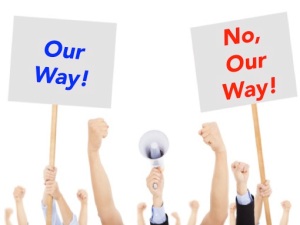 We create whole mental frameworks around these differences, always with the base assumption that me/we are correct and “they” are incorrect. Why do you support a certain sports team? More than likely, it’s because you were born in a certain city or your family has ties to that city. There is nothing inherently better about the Yankees or the Red Sox. What creates that distinction is “I”. You, your mindsets, your filters are the only difference between the two.

What makes the Yankees better than the Red Sox, Islam better than Christianity, Republicans better than Democrats, China more entitled to some islands than Japan? With rare exception, it has to do with who you are, who your family is, where you were born. Your “I” became indoctrinated by Hinduism, Red Sox fan, Japanese, or Democrat by the people around you.

Your tribe passed those mindsets on to you and you consciously or unconsciously adopted them. They all became part of your “I”. And where did the tribe get them? Well, they received them through the same process. Generation after generation believing something “because we always have”.

This all kicks in automatically each morning with our first thought….”I”. This unconscious acceptance of “my/our way” over “your way” has been the human norm for thousands of years. Teachers have periodically come along and taught bigger, broader ideas about who we are in the world, but the tribe generally persecutes and eventually does away with such heretics.

The only way to improve ourselves in this regard is to become conscious of the process. We must carefully and consciously choose our “I” and allow others the freedom to choose theirs too. It’s inevitable that we will not all agree. ” But, you know what? It’s amazing how much evil disappears from our world when we stop counting those who simply disagree with us as evil.

He is the author of the Anunnaki Awakening series (2015). Book 1 – Revelation – is now available in paperback and on Kindle. This trilogy takes Ancient Aliens out of the past and into the present. An interstellar, interdimensional journey ensues with humanity’s future hanging in the balance.

I am the Founder of The Affirmation Spot, author of Annuanki Awakening, and co-founder of 6 Sense Media. My latest books are the Anunnaki Awakening: Revelation (Book 1 of a trilogy) and The Power to Be You: 417 Daily Thoughts and Affirmations for Empowerment. I have written prolifically on the topics of personal development and human potential for many years. By day, I write sales training for Fortune 100 company. I began studying affirmations and positive thinking after a life-threatening illness at 25. My thirst for self-improvement led him to read the writings of Joseph Campbell, Wayne Dyer, Deepak Chopra, Neale Donald Walsch, and many other luminaries in the fields of mythology and motivation. Over time, I have melded these ideas into my own philosophy on self-development. I have written, recorded, and used affirmations and other tools throughout that time to improve my own life and I have a passion for helping other reach for their goals and dreams. Ray holds a Bachelor's of Science Degree in Secondary Education in Social Studies from University of Kansas. He lives in Spring Hill, Ks with his wife.
View all posts by Ray Davis - The Affirmation Spot →
This entry was posted in Commentary, Opinion, Shift Paradigms and tagged empower your mind, Groupthink, Intolerance, Our way is the only way, Seeing beyond your group, society dictates, the tribe says, Tolerance, us vs. them. Bookmark the permalink.

2 Responses to The “I” Problem