Posted on February 3, 2016 by Ray Davis - The Affirmation Spot 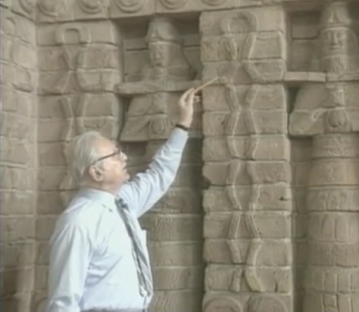 As someone working on a series of books partly based on the writings of Zecharia Sitchin, I’ve given a lot of thought to the ongoing debate about his work. Having been exposed to his work for many years, I’ve drawn my own conclusions about what I think he got right and what I think he may have gotten wrong.

The mainstream paints “Sitchinites” as a kind of new-age religious cult believing in space alien gods and a planet that will come crashing into Earth one day soon. Those strains are out there, for sure, but most of the people I know who study Sitchin’s work are some of the most well-read people I know. They don’t base their paradigms completely on him. They simply see him as the clearest explanation that pulls the paradigm together.

So, in response to Dr. Michael S. Heiser’s well-known website called Sitchin is Wrong, I’m going to write a series of blogs to explore why I believe Sitchin right.

Reason #1. Sitchin is an honest journalist. He may not have been the most skilled near-eastern linguist on the planet and we’ll deal with that assertion in a future blog post. However, he takes the Sumerians as eye-witnesses to the events in their world.

I don’t know about you, but TV analysis drives me a little nuts. You watch an event or listen to a speaker and then they bring on a team of experts to explain to you what you just saw or heard. The assumption is you’re not smart or “trained” enough to analyze it yourself. You need their help.

Many academic fields, including archaeology, work the same way. Strike one against Sitchin, or against you, is you lack the training to properly assess the Sumerian texts and all the sub-meanings you should attribute to them. Because just like a news network, they need you to see the information terms of the proper theory – theirs.

Here are just a few of the many examples.

These are just three examples. I could cite many, many more. The theme is always the same. Sitchin takes the Sumerian reports at face value and reports what they say happened. The experts repeatedly take the approach of, “Yeah, yeah we know what the texts say, but here’s what we know really happened.”

Sitchin gives the Sumerians credit for being able to tell us what was going on around them. Just like we would believe the eyewitness to an accident before we’d believe an accident expert who wasn’t there.

The experts are generally dismissive. They claim we’re dealing with illiterate, unscientific people who made up all these stories to make sense of their world.

Who do you believe? The Sumerians or today’s experts?

Stay in your truth!

“My mind is officially blown,” wrote one reviewer. “After Chapter 10, I couldn’t put it down,” said another.

Ray’s speculative fiction novel, Anunnaki Awakening: Revelation, is turning heads. Where did humanity really come from and where is it going? This is Book 1 of a trilogy. The Awakening has begun!

Learn more about the trilogy and order your signed copy today at AATrilogy.com.

I am the Founder of The Affirmation Spot, author of Annuanki Awakening, and co-founder of 6 Sense Media. My latest books are the Anunnaki Awakening: Revelation (Book 1 of a trilogy) and The Power to Be You: 417 Daily Thoughts and Affirmations for Empowerment. I have written prolifically on the topics of personal development and human potential for many years. By day, I write sales training for Fortune 100 company. I began studying affirmations and positive thinking after a life-threatening illness at 25. My thirst for self-improvement led him to read the writings of Joseph Campbell, Wayne Dyer, Deepak Chopra, Neale Donald Walsch, and many other luminaries in the fields of mythology and motivation. Over time, I have melded these ideas into my own philosophy on self-development. I have written, recorded, and used affirmations and other tools throughout that time to improve my own life and I have a passion for helping other reach for their goals and dreams. Ray holds a Bachelor's of Science Degree in Secondary Education in Social Studies from University of Kansas. He lives in Framingham, MA with his wife and his black lab, Mia.
View all posts by Ray Davis - The Affirmation Spot →
This entry was posted in History, Uncategorized and tagged Anunnaki, Gods, Sitchin is Right, Sumerians, zecharia sitchin. Bookmark the permalink.

3 Responses to Sitchin is Right – Reason #1