We must give up the life we have planned, so as to accept the one that is waiting for us.
~Joseph Campbell

There is perhaps no writer or thinker who had more influence on my own thinking than the great Joseph Campbell.

He was born in White Plains, New York on March 26, 1904. He attended top schools and then spent much of his 20s and early 30s traveling, reading, and gathering influences that would lead to passion for a comparative analysis of mythology and religion. He was immortalized in a series of interviews with Bill Moyers broadcast on PBS after Campbell’s death called The Power of Myth. His famous “Follow your bliss” aphorism was made famous during that broadcast.

Follow your bliss and the universe will open doors for you where there were only walls.
~Joseph Campbell

Campbell sought to find the commonalities in mythologies. He was heavily influenced by Carl Jung and believed that the commonality in mythologies around the world sprung from their origins as universal psychological templates. Jung had called them archetypes.

Today Campbell’s view of comparative mythology has fallen out of favor in an era of identity politics and, it would seem, identity mythology. Various cultures are interested in grabbing their unique glory for their contributions to humanity. They’re not interested in looking for common ground and what it might convey to us about our commonality as human beings. Some contemporary mythologists even consider Campbell’s approach “mushy.” They claim he glosses over the differences in reaching the commonalities and thereby minimizes the significance of various cultures.

I suppose there’s a middle ground here where the right mix of acknowledging the differences and seeing the power of the commonality can be reached. However, I believe Campbell’s message that unifies the great mythologies is more important today than ever. In a moment when the human race threatens again to rip itself apart in racial, religious, and political sectarianism, Campbell’s gentle reminder of the common values that lay at the core of our oldest teachings and most sacred writings are important.

He was not suggesting that Sumeria, India, Egypt, China, or the ancient cultures elsewhere didn’t make singular contributions. He was suggesting that they suggest something that is uniquely and universally human. He was extolling the WHOLE human race over its parts. I think there’s value in that, today more than ever.

What was the commonality he found? Well, in addition to a set of core values we can all probably recite without help – do unto others, respect life, etc. – he found a common “Hero’s Journey” that fills the pages of myths around the world. Some have called it the Monomyth. Campbell did not invent it. He wasn’t even the first scholar to begin to define it. He was the one who put its most famous outline to it and popularized it. His was a 17-step version outlined in the linked graphic. Once you know it, you can have fun finding in many of your favorite movies.

He saw it running through mythologies and great literature the world over. In fact, great movie makers influenced by Campbell began to adopt this a successful formula for movies, most famously George Lucas and Star Wars. 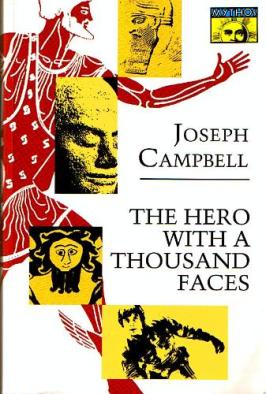 Other have since modified it and simplified it, but Campbell was the one who brought this powerful storytelling tool to the masses and it all flowed from common stories told the world over from time immemorial.

Campbell and his writings played a HUGE part in my life. I read The Hero with A Thousand Faces, his seminal work, coming out my own near death experience. The Hero’s Journey he described spoke to me because it mapped out the life I was living day-to-day. In the years that followed, I read virtually all of his books.

It’s hard to estimate the value level of his influence, but suffice it to say you will find elements of Campbell’s ideas in Anunnaki Awakening: Revelation. Maria Love’s story over this book and coming second and third installments is the Hero’s Journey. My ideas about what our mythology tells us about our past are as heavily influenced by Campbell as they are by Zecharia Sitchin.

Hopefully, my current writing is doing both of them justice. I’ve even long ago adopted my own version of Follow Your Bliss in the closing to my blog posts.

Ray Davis is the author of Anunnaki Awakening: Revelation – order your signed copy today at AATrilogy.com – founder of The Affirmation Spot and an advocate for the potential of the human race.

I am the Founder of The Affirmation Spot, author of Annuanki Awakening, and co-founder of 6 Sense Media. My latest books are the Anunnaki Awakening: Revelation (Book 1 of a trilogy) and The Power to Be You: 417 Daily Thoughts and Affirmations for Empowerment. I have written prolifically on the topics of personal development and human potential for many years. By day, I write sales training for Fortune 100 company. I began studying affirmations and positive thinking after a life-threatening illness at 25. My thirst for self-improvement led him to read the writings of Joseph Campbell, Wayne Dyer, Deepak Chopra, Neale Donald Walsch, and many other luminaries in the fields of mythology and motivation. Over time, I have melded these ideas into my own philosophy on self-development. I have written, recorded, and used affirmations and other tools throughout that time to improve my own life and I have a passion for helping other reach for their goals and dreams. Ray holds a Bachelor's of Science Degree in Secondary Education in Social Studies from University of Kansas. He lives in Spring Hill, Ks with his wife.
View all posts by Ray Davis - The Affirmation Spot →
This entry was posted in Mythlogy, Uncategorized and tagged Comparative mythlogy, comparative religion, Hero's Journey, Joseph Campbell, Monomyth. Bookmark the permalink.

1 Response to Joseph Campbell, Comparative Mythology, and the Monomyth