The Three Gods and How to Tell Them Apart 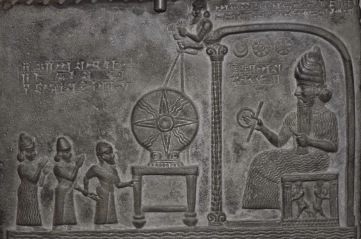 Many in the world believe that old books will determine our destiny. For me, nothing could be further from the truth. I agree old books are and they have controlled our destiny for millennia. There is no accident in this.

You see, we have had, in my opinion, a cosmic bait and switch. We use the word God as a nebulous placeholder without specifically saying who we mean. This has allowed this shell game to work throughout our history.

I’m not suggesting we throw the proverbial baby out with the bathwater. The ancient texts also provide us much wisdom and many hints to the truth about our past. The fact is there are three god types described in these texts. We would do well to distinguish among them as we read them.

Our first gods were the gods small g (the Anunnaki) that modified us, openly ruled us, and thus claimed us as their own, with at least some justification.This is why our oldest texts are polytheistic.

Due to their own squabbles, we eventually got our second God. This is the gods small g who became the God big G. At some point one of the Anunnaki, I would argue it was Enlil, banished the others and demanded that he alone be worshipped by humanity as their God.

The record – Sumerian, Biblical, and many others – shows that we rebelled against both systems and, perhaps, took sides in the battles among the gods small g. This created a situation where the victor God claimed certain humans as particularly his own. This led to the monotheistic belief that “our God is the only God.”

As I argue in my novel, Anunnaki Awakening: Revelation, both of these gods are temporal beings with temporal needs. If not, why did they require our gold, our cattle, our crops? Why did they demand, above all else, our worship our obedience? Why did they openly seek to keep us down and in the dark?

The Bible, the Quran, and virtually every other ancient spiritual text has some element of this need by God or the gods to keep humanity on our knees, or better on our faces, and in fear. There is no salvation in this. There is only continued slavery for a species – us – that has been manipulated and kept on a chain from the beginning. Why?

I think the answer to that question is self-evident.

The record indicates our ancestors rebelled against it multiple times. These beings who were running the show feared human unity and so they divided us. They fear human knowledge and so they sought to keep truth from us.

When we rebelled they kicked us out of “the garden.” They stopped meeting our basic material needs in exchange for our worship and work. They left us in the world we have today, as recorded in Genesis 3:19.

“By the sweat of your brow will you have food to eat until you return to the ground from which you were made. For you were made from dust, and to dust you will return.”

Yet today, in a world flooded with more information than ever, we are becoming more conditioned to do their bidding by dividing ourselves, limiting ourselves, and thinking of ourselves in the worst terms.

We’re told it’s for our own good. We are “children” and we require a firm hand. I suspect it has been more for their benefit than for ours.

What need would the being capable of creating this vast universe have for our gold, our crops, or our cattle? What need would such a being have for submitting lesser beings that are a part of it’s amazing creation? I think the answer to that question is pretty self-evident too.

This brings us to the third God. That is being or the intelligence that is the foundation of it all…us, the gods small g, and the gods small g that became the God big G. This is the one Hinduism calls, “The dreamer of the cosmic dream.”

It’s the one Tao Te Ching describes as:

The Tao that can be spoken is not the eternal Tao
The name that can be named is not the eternal name
The nameless is the origin of Heaven and Earth
The named is the mother of myriad things
Thus, constantly without desire, one observes its essence
Constantly with desire, one observes its manifestations
These two emerge together but differ in name
The unity is said to be the mystery
Mystery of mysteries, the door to all wonders

How can we tell the difference in a world where the word God passes nebulously from our lips? Where people worship the personalities of the first two Gods that keep humanity down, while they think they’re worshipping the third?

How can we know when we’re dealing with the Third God?

Some would argue that humanity’s negative tendencies would create chaos in such an environment of freedom. No doubt that after millennia of living as conditioned beings, such sudden freedom would cause upset. No doubt the temporal beings that placed us in this situation and likely still crave our worship won’t like it.

But, the time has come for humanity to seize its own destiny, reach its potential, and join the broader community of civilizations. Anything less, is to continue to allow the gravity of our history to keep slogging in the literal and spiritual mud.

I am the Founder of The Affirmation Spot, author of Annuanki Awakening, and co-founder of 6 Sense Media. My latest books are the Anunnaki Awakening: Revelation (Book 1 of a trilogy) and The Power to Be You: 417 Daily Thoughts and Affirmations for Empowerment. I have written prolifically on the topics of personal development and human potential for many years. By day, I write sales training for Fortune 100 company. I began studying affirmations and positive thinking after a life-threatening illness at 25. My thirst for self-improvement led him to read the writings of Joseph Campbell, Wayne Dyer, Deepak Chopra, Neale Donald Walsch, and many other luminaries in the fields of mythology and motivation. Over time, I have melded these ideas into my own philosophy on self-development. I have written, recorded, and used affirmations and other tools throughout that time to improve my own life and I have a passion for helping other reach for their goals and dreams. Ray holds a Bachelor's of Science Degree in Secondary Education in Social Studies from University of Kansas. He lives in Spring Hill, Ks with his wife.
View all posts by Ray Davis - The Affirmation Spot →
This entry was posted in Anunnaki, God, Religious texts, sumerian gods, Uncategorized and tagged Anunnaki, Enlil, God Big G vs. gods small g, Religious texts, sumerian gods, Who were the Anunnaki. Bookmark the permalink.