The Ten Commandments of Scientism

Posted on September 30, 2016 by Ray Davis - The Affirmation Spot 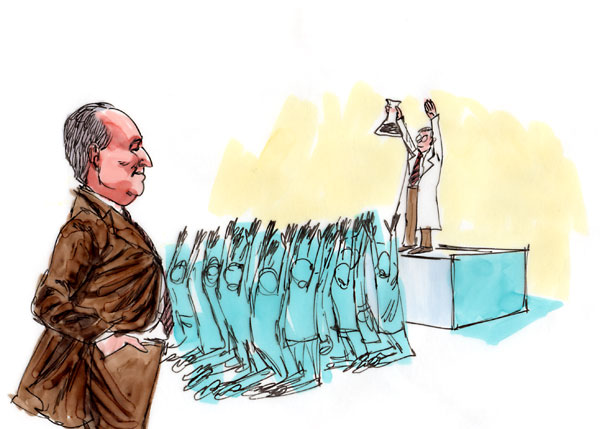 Scientism is prevalent religion of the modern western world. Let’s differentiate here. Science is the pursuit of truth using the scientific method. Scientism is a dogmatic belief system defended fiercely on the Internet by believers every bit as rabid as any traditional religion. It has succeeded by vanquishing all other philosophical and spiritual approaches from classrooms throughout the western world. Its dogmatic expressions are marked by the same core flaw of other religions. Our truth IS the truth and not merely a belief.

Ten Commandments of Scientism are:

1. There is no intelligence behind this multiverse.
2. Everything in the universe, including life and consciousness, is one massive cosmic accident.
3. There is no way to knowledge, but the scientific method.
4. If it can’t be observed, weighed, or measured, it’s not real.
5. All things supernatural or extraterrestrial are voodoo.
6. Consciousness is an emergent property of biology and only exists in the physical brain.
7. Darwin’s Theory of Evolution settles all debates.
8. Faster-than-light travel is impossible.
9. Ancient human beings are sophisticated scientists and engineers when building megaliths, but unsophisticated morons when talking about the beings that helped them with civilization.
10. If you don’t have credentials after your name, you can’t know anything important.

I am the Founder of The Affirmation Spot, author of Annuanki Awakening, and co-founder of 6 Sense Media. My latest books are the Anunnaki Awakening: Revelation (Book 1 of a trilogy) and The Power to Be You: 417 Daily Thoughts and Affirmations for Empowerment. I have written prolifically on the topics of personal development and human potential for many years. By day, I write sales training for Fortune 100 company. I began studying affirmations and positive thinking after a life-threatening illness at 25. My thirst for self-improvement led him to read the writings of Joseph Campbell, Wayne Dyer, Deepak Chopra, Neale Donald Walsch, and many other luminaries in the fields of mythology and motivation. Over time, I have melded these ideas into my own philosophy on self-development. I have written, recorded, and used affirmations and other tools throughout that time to improve my own life and I have a passion for helping other reach for their goals and dreams. Ray holds a Bachelor's of Science Degree in Secondary Education in Social Studies from University of Kansas. He lives in Spring Hill, Ks with his wife.
View all posts by Ray Davis - The Affirmation Spot →
This entry was posted in Uncategorized and tagged Science as a religion, Scientism. Bookmark the permalink.

2 Responses to The Ten Commandments of Scientism