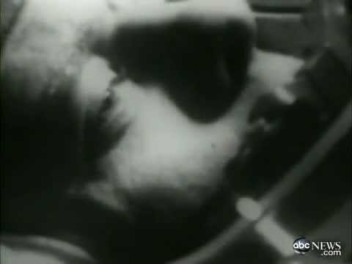 The date was May 5, 1961. Twenty-three days earlier the Soviet Cosmonaut Yuri Gagarin had become the first human being in space. The United States was eager to answer. Astronaut Alan B. Shepard was selected for the mission. He was to pilot the Freedom 7 Mercury capsule. The rocket ship carrying his capsule lifted off from Cape Canaveral at 9:34 a.m. The flight lasted just 15 minutes and 22 seconds, but Shepard achieved a sub-orbital trajectory, making him the first American and the second human being in space.

Upon seeing the Earth for the first time from that vantage point, he radioed to the ground, “What a beautiful view.”

His craft splashed down 302 miles east of Cape Canaveral. Shepard was retrieved by helicopter and transported to the air craft carrier USS Lake Champlain.

He later famously said, “It’s a very sobering feeling to be up in space and realize that one’s safety factor was determined by the lowest bidder on a government contract.”

Later Shepard commanded Apollo 14 and, at the age of 47, became the fifth and oldest man to walk on the moon. He retired from the US Navy as a Rear Admiral.

The following video shows the entire mission beginning with Shepard entering the spacecraft through is rescue at sea.

I am the Founder of The Affirmation Spot, author of Annuanki Awakening, and co-founder of 6 Sense Media. My latest books are the Anunnaki Awakening: Revelation (Book 1 of a trilogy) and The Power to Be You: 417 Daily Thoughts and Affirmations for Empowerment. I have written prolifically on the topics of personal development and human potential for many years. By day, I write sales training for Fortune 100 company. I began studying affirmations and positive thinking after a life-threatening illness at 25. My thirst for self-improvement led him to read the writings of Joseph Campbell, Wayne Dyer, Deepak Chopra, Neale Donald Walsch, and many other luminaries in the fields of mythology and motivation. Over time, I have melded these ideas into my own philosophy on self-development. I have written, recorded, and used affirmations and other tools throughout that time to improve my own life and I have a passion for helping other reach for their goals and dreams. Ray holds a Bachelor's of Science Degree in Secondary Education in Social Studies from University of Kansas. He lives in Spring Hill, Ks with his wife.
View all posts by Ray Davis - The Affirmation Spot →
This entry was posted in space, space exploration, Uncategorized and tagged Alan Shepard, Astronaut, First American in space. Bookmark the permalink.