“In order to become the master, the politician poses as the servant.”

Over the past several days, I have had several people share with me how tired they are of this political season. Few things in American life expose us to more negativism and leave us feeling more slimy than political campaign ads. It seems there is little many of these politicians won’t do or say in their thirst to rule over the rest of us.

Make no mistake, Charles De Gaulle had it right. Politicians speak of themselves as servants, but think of themselves as masters. They believe they know what is best for the rest of us and – right, left, Democrat, Republican – they seek to impose their wills upon the people rather than allowing the peoples’ collective wisdom guide them.

Worse yet, the system has produced generations of either/or thinkers caught in a hopeless ping pong match between two parties whose clever branding keeps people believing that political salvation lies just beyond electing “my party” to power one more time – this is the time. I know it is. It must be.

This self-perpetuating system locks out voices not deemed “mainstream” (i.e. linked to one of the two parties). Disempowers people by convincing them that there are only two choices – vote for “the lesser of two evils” or drop out of the system completely.

Millions torture their minds daily with visions of the horrors that will befall the nation if that other – evil – party is allowed to have power. They are exhorted by talking heads – radio and TV – who pose as bringers of news and information, but are simply party mouthpieces conducting daily revivals for the party faithful. They whip up the fear, whip up the doubt, whip up the division. 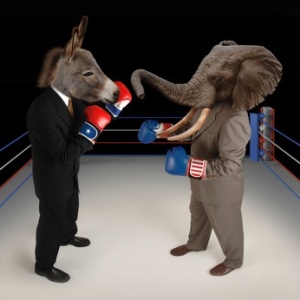 My friends, this blog is about empowering you and me and empowering our minds. That is my commitment to you. Many times that comes in the form of affirmations or feel good stories, but there are times when the hard issues must be dealt with and I will not avoid them. Our minds have been enslaved by these two parties to believe there is no other way to the future, but through them.

The time has come to stop giving your power to personalities and political parties and begin again to claim it for yourself and for each other. We have been divided and conquered by this political class and it is high time that we unite take our power back. We must stop waiting on heroes and realize that we are the heroes.

I hope these affirmations will help to re-engage a healthy independence and skepticism of the powers that be. I hope they will help to re-energize your thinking and bring you back to that calm political center where sound decisions and reasonable dialogue can take place. Vote your conscience next week. Vote for yourselves and your families. Don’t vote based on “Tastes Great” vs. “Less filling”.

The time is now to take back our thinking and take back our power. Select the political affirmations and truisms below that resonate with you and keep them near you this political season.

Thank you for sharing this page with a friend.

I am the Founder of The Affirmation Spot, author of Annuanki Awakening, and co-founder of 6 Sense Media. My latest books are the Anunnaki Awakening: Revelation (Book 1 of a trilogy) and The Power to Be You: 417 Daily Thoughts and Affirmations for Empowerment. I have written prolifically on the topics of personal development and human potential for many years. By day, I write sales training for Fortune 100 company. I began studying affirmations and positive thinking after a life-threatening illness at 25. My thirst for self-improvement led him to read the writings of Joseph Campbell, Wayne Dyer, Deepak Chopra, Neale Donald Walsch, and many other luminaries in the fields of mythology and motivation. Over time, I have melded these ideas into my own philosophy on self-development. I have written, recorded, and used affirmations and other tools throughout that time to improve my own life and I have a passion for helping other reach for their goals and dreams. Ray holds a Bachelor's of Science Degree in Secondary Education in Social Studies from University of Kansas. He lives in Spring Hill, Ks with his wife.
View all posts by Ray Davis - The Affirmation Spot →
This entry was posted in politics, Uncategorized and tagged bernie sanders, challenging the status quo, donald trump, political affirmations, political revolution, political truths. Bookmark the permalink.